Around 120 experts from science and business attend the 2018 LeadershipGarage-Lounge on January 30th and find a unique, interactive congress format: the “experiential lounge”.

Just a moment ago, in the new Libeskind central building of the University of Leuphana Lüneburg where the LeadershipGarage Lounge 01/2018 is taking place, the chairs were still standing in a row – but now the room has quickly been transformed: The rows of seats making room for movable walls equipped with post-its and stick-pins, in front of which simple seating groups are arranged. This is what a Design Thinking-Space looks like - and it will shape the next 60 minutes.

The design thinking session is led by the innovation ambassadors Hannah, Christian, and James. Last year, they completed a change-agent course for university students at Stanford University's d. school, focusing on the innovation method of design thinking. Prof. Dr. Sabine Remdisch, director of the LeadershipGarage, who is a regular guest researcher at Stanford University and is always up to date with the latest developments in their programs, connected them with the training.

Returning from the USA, the three University Innovation Fellows embarked on their first project: “Design Thinking@LeadershipGarage”. Here, students and companies will work together on organization-specific challenges with the help of design thinking. Premiere of this project: today. 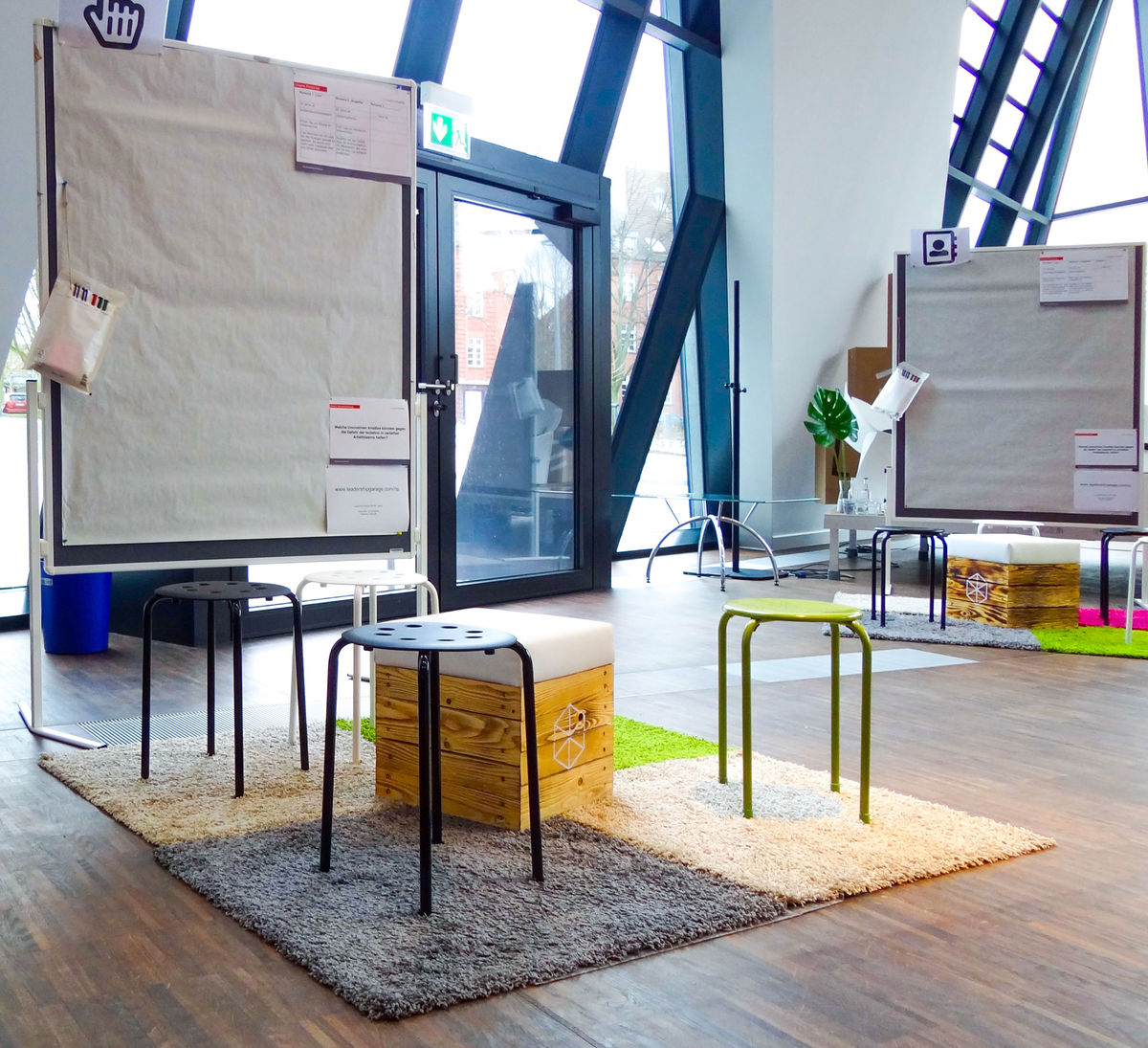 Setup for the Design Thinking session

Before the guests of the LeadershipGarage Lounge actively move through the steps, they will learn something about the origins of this method: The acceleration of digital technologies requires new products and innovation from companies in ever shorter succession, and companies need a way to keep up. Design thinking is a tool to help teams create an atmosphere conducive to innovation. The starting point is to think from the customer's point of view, and to release the creative potential necessary for innovation in companies by means of manageable structures. Developed at the d. school in Stanford, Design Thinking became known around the world.

The flow of such a work process essentially consists of the phases “Understanding the customer's situation - defining the problem - generating ideas - developing prototypes - testing the solution”. The production and presentation of a prototype is at the heart of design thinking.

In order for the work process to begin, small teams of five to six people are formed and assigned to one board each. This is also where the task awaits, which will be solved in the following hour and which deals with a special aspect of companies in the digital age: work and leadership at a distance.

Process moderation Hannah first invites the groups to examine the task and its problems. Immediately, excited murmur spreads out around the room and it is already evident how the method of design thinking turns what were once strangers into well-functioning work teams in no time at all. Again Hannah takes over the direction and sends the groups into the phase of collecting ideas. For this phase, the following applies: The ideas must not be heavily evaluated, every idea counts. And so in the next ten minutes every idea, even the craziest, will be written on the colorful post-its, with which the boards are visibly filling up.

In the next step, the participants arrange their ideas collected so far across the board and select an idea which is to be implemented as a prototype. In this case, "prototyping" means bringing the best idea into a storyboard, i.e. presenting the problem solution in individual images. The storyboard is first presented to the neighboring group before it goes into finalization, the highlight of this design thinking session. Now it's time to film the newly developed storyboard. For this purpose, the images can be filmed on a smartphone with a spoken text, but it is also possible to act them out. Some of the video clips created in this way are transferred to the big screen and receive a lot of applause.

Today's pilot project was an exciting experience for the innovation ambassadors Hannah, Christian, and James. And if you listen to the enthusiastic lounge participants, it is more than likely that their project idea will be continued.

The Team of the Leuphana Institute of Performance Management.